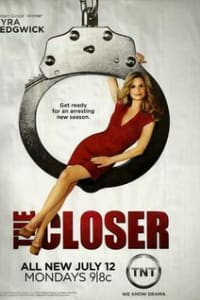 The Closer is an American television police procedural, starring Kyra Sedgwick as Brenda Leigh Johnson, a Los Angeles Police Department Deputy Chief. Season 6 comes with the theme for it is attraction. In the opening of season 6, the investigation into the murder of a man who loved to take pictures of star constellations from the privacy of his own balcony leads Brenda and the squad to think there may be a close connection to the woman with whom he was having an affair.

Murder of a Cat