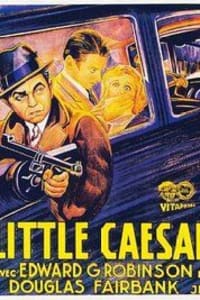 The first “talkie” gangster movie to capture the public’s imagination, Mervyn LeRoy’s Little Caesar started a cycle of crime-related movies that Warner Bros. rode across the ensuing decade and right into World War II with titles such as All Through the Night (1941). At the start of the picture, Caesar Enrico “Rico” Bandello and his friend Joe Massara are robbing a gas station.