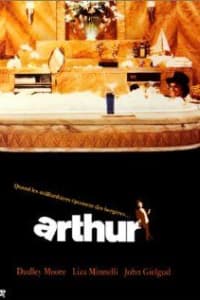 Arthur (Also Known As: Arturo, el millonario seductor) is a Comedy, Romance film directed and written by Steve Gordon. It was released on 17 July 1981 (USA). It stars Dudley Moore, Liza Minnelli, John Gielgud. The film’s content : Arthur is a happy drunk with no pretensions at any ambition. He is also the heir to a vast fortune which he is told will only be his if he marries Susan…