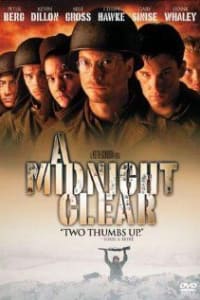 A Midnight Clear is a 1992 American war drama film playing out at Christmas. It tells the story of US GIs holding an isolated cabin in the Ardennes against a handful of Germans cut off from their main force. Combat-weary and short of rations, both sides are determined to survive.